skip to main | skip to sidebar

When I tell people that I have written a book about the religious history of beards, I usually get asked two questions.

The first one is 'really?'. Yes really.

The second is, 'why?'. Now that is a much better question.

The first part of my answer to that is simply because it is a darn good yarn. There are so many moments through the history of the church where you'll find yourself saying 'wow, I never knew that!' and moments when you will have to stop and laugh.

But the second part of my answer to the 'why' question is perhaps more important.

The Jews in Jesus's day thought it part of their religious duty to grow a beard - just as they would observe the kosher food laws. Church fathers like St Augustine and Clement of Alexandria thought it an essential part of Christian discipleship for men to grow a beard. As the eastern and western churches grew apart and eventually split in the Great Schism of 1054, one of the points of contention was a difference over beards and it became a point significant enough for popes and partriarchs to fight over. And protestant reformers and evangelical revivalists could be picked out by the hairiness of their faces. 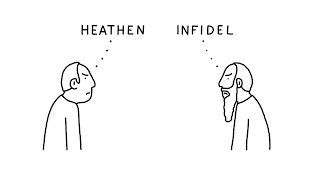 So why on earth did they all think beards were so important?

Now we're getting to the really interesting question.

To answer that, we will find the revealing story of how cultural context gets imported into theology and our reading of scripture. We will see how divisions between 'us' and 'them' bring seemingly trivial issues to the fore when they become points of difference around which the groups can rally.

That is why I wrote a book on beards - because the story of our beard history tells us so much about ourselves. Those who do not know their beard history are bound to regrow it.

Beard Theology is available from all good book shops (and probably some rubbish ones too).

Sign up for the latest news from The Church Mouse

The Church Mouse pays homage to the gods of data privacy and GDPR and will never give your email address to anyone else or use it for any purpose other than sending you the latest posts from this website or replying to your messages.